Sing 2 movie review: You and your kids all will love this 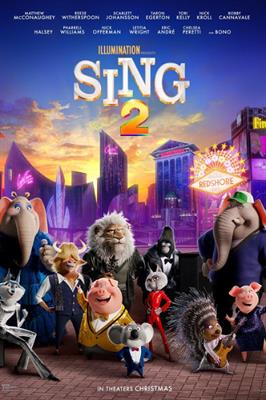 Illumination hit the bull’s eye when they made ‘Sing’ in 2016 and saved not just the theater, but gave everyone who did not fit in a voice, a place in the Sun.

You were a dreamer like Buster Moon until you found out that you are Rosita, the Homemaker who dreams of music. No, no, perhaps you are Johnny who cannot follow his dad’s way of life, he wants to play the piano and sing.

Or you’re Ash the porcupine who’s had her heart broken by a two timing boyfriend. I was so sure I knew a Gunther and someone like Meena too.

So when the trailer of Sing 2 dropped, I knew I would have to make a new, valid excuse to watch a children’s film. And this time I had a perfect one: The song I consider as the anthem of my life, the song sung by U2’s Bono in their album The Joshua Tree is being sung by none other than Bono himself.

The movie becomes simply irresistible. So Bono joins the movie as the voice of Clay Calloway the lion along with Matthew McConaughey, Scarlett Johansson, Tori Kelly, Seth McFarlane and more…

The moment the movie opened, I wanted to get up and dance because they were singing to Prince! The kids will be mesmerized with the visuals but a Prince song in a kiddie film? Brilliant, simply brilliant. Let’s go crazy is the song from Prince’s Purple Rain album.

In this story, Buster Moon takes his bunch of performers to a big city which looks suspiciously like Las Vegas to get an audition with the big bad wolf in the entertainment business himself: Mr Krystal.

How they get that audition will get you laughing under that mask. You’re not likely to forget the sound of the squeaky clean floors soon! And we see how a small lie gets Buster and the gang a show! That’s when you fall in love with Miss Crawly (voiced by the writer-director Garth Jennings himself) who is so traumatized by her meeting with the reclusive lion that she can say nothing but, ‘Pew, pew, pew pew!’

Now it’s time to feed the kids so they don’t become restless with a very grown up turn the story takes: the boss insists his daughter join the show as a lead, the threat of ‘I will throw you off the roof becomes real, the staged impossible romance between the blonde romantic hero and the super shy Meena, Rosita’s fear of heights and so much more. Everything is interesting, and superbly done, but it’s meant for grownups, not the kiddies. I loved it.

The show, the sets (especially the planet Saturn’s moving rings) are incredible. And during the show too, things that happen (the TV appearance, the social media, and the perfectionist proboscis monkey) will keep you the adult more engaged than your kids. But then the song you’ve been waiting for comes on, and I was reduced to tears of joy singing along. Plus this film offers a super extra: ‘Your song saved my life’

I stepped out of the fabulous finale floating in air, humming ‘But I still haven’t found what I’m looking for’. This film is simply wonderful, but as I have said about like six times already, it’s a grown up movie!