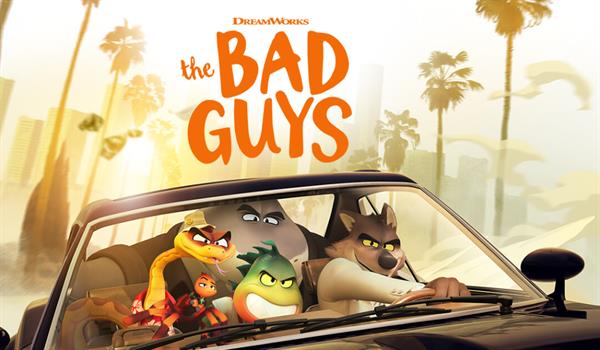 Based on the kids’ graphic novel series by Aaron Blabey, this new DreamWorks Animation action comedy gives a criminal gang of anthropomorphized animals a heist movie akin to ‘Oceans 11.’ The Bad Guys team led by a pickpocket, Mr. Wolf (Sam Rockwell) who is often compared to Danny Ocean, includes a safecracker, Mr. Snake (Marc Maron), an expert at disguise, Mr. Shark (Craig Robinson), a super hacker, Ms. Tarantula (Awkwafina), and a poison gas producer Mr. Piranha (Anthony Ramos).
They have successfully coordinated numerous heists and are on the verge of pulling off yet another one - a valuable statue from a glamorous gala organized to award the celebrated, philanthropic guinea pig Professor Marmalade (a perky Richard Ayoade).
Pierre Perifel, making his feature directing debut, lays out an interesting array of takes that sway you to the heights. The script from Etan Cohen aides in the generation of fairly supple moments of elasticity and humor. The verbose thieves at the center of it all draw us in with their slippery antics and you can’t help but root for them (even though you know they are criminals).
There’s nothing new about this. We’ve seen this happening in several animation capers. The animation is imaginative and active and the physical comedy is nattily executed keeping in mind the natural instincts of the anthropomorphized creatures. The characters are flippant but the resemblances to vintage cartoons make it feel familiar and ensures nostalgic amiability. There are gags aplenty and the chase action is quite fantastic.

The action is inventive and exciting. The Bad Guys make their getaway through an unfinished motorway with a helicopter, a meteorite and a deadly wave of hypnotized guinea pigs in the picture. The pace is quite frenetic but midway through, the vitality and dynamism does begin to sag. Ultimately, its’ the script that drives home the entertainment with some nudges to redemption and chances to better oneself. ‘No one is as bad as they seem’ is what this effort aims to convey to its youngish audience.