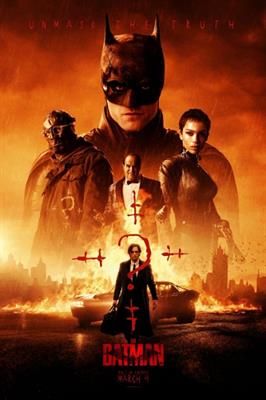 A sadistic killer Riddler (Paul Dano) leaves behind a trail of cryptic clues after targeting his victims. The Gotham City is under threat again. The clues by Riddler gets intriguing as it starts probing into Bruce Wayne / Batman(Robert Pattinson) life. It’s time for justice, Gotham city should get what it deserves.

Batman loves comeback they say… from the 1960s to this 2022 Batman has undergone variations with new and stronger challenges.

This Matt Reeves version "The Batman," – marking the debut of The Twilight fame Robert Pattinson in the lead role is the dark, edgy, probing and most challenging entry in the Batman series after Christopher Nolan’s trend setting "The Dark Knight.".

It’s an ambitious super noir that has intense but bloodless violence, torture scenes and a creepy villain.

Writer Director Matt Reeves (War for the Planet of the Apes) and his co writer Peter Craig (The Hunger Games: Mockingjay), give a good, moody and dark reminder of movies like "Zodiac".

A serial killer thriller wrapped in a comic book having a dark film noir atmosphere having a style that gives a pious ode Nolan’s style Batman movies.

Reeves has shown his love towards the classics and Fincher’s neo-noir movies as well in this remarkable superhero movie that is certainly not at all a cookie cutter or say a tool by a corporate production house to cash on the popularity of the franchise.

Reeves The Batman carries its own charm in all its odes and best part is the ‘light’ we see in this dark super hero noir.

The high octane action sequences are fantastic though not very frequent as The Batman is more of a psychological mind game between the Riddler and Bruce Wayne aka Batman.

Robert Pattison is powerful though one note at times but he provides the unique vulnerability to this version.

Zoe Kravitz as Selina - the Catwoman is charming.

Colin Farrell is outstanding as Penguin.

And Paul Dano as the Riddler is menacing, the best Batman villain after Joker. Great support comes from Andy Serkis.

Special mention for Greig Fraser’s cinematography and Michael Giacchino’s score is a must, they give the required atmosphere and unique colour to the movie.

Matt Reeves "The Batman," is the best thing to happen to DC Warner Batman franchise after ‘The Dark Knight’. Christopher Nolan’s version was path breaking/ trend setting, Matt Reeves version is grounded, fighting for survival and searching for hope.