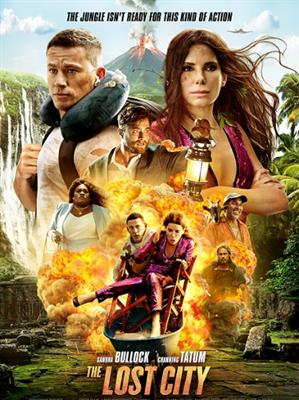 What: The Lost City – the action-adventure comedy by the Nee brothers, starring Sandra Bullock and Channing Tatum with Daniel Radcliffe and Brad Pitt (in a special cameo) is an enjoyable fun in theatres with your popcorn.

While on tour promoting her new book with Alan, Loretta gets kidnapped by an eccentric billionaire Abigail Fairfax (Daniel Radcliffe) who hopes she can lead him to an ancient city's lost treasure from her latest story. Determined to prove he can be a hero in real life and not just on the pages of her books, Alan sets off to rescue her.

Yes, it is similar to the 1984 Kathleen Turner, Michael Douglas, and Danny DeVito starrer “Romancing the Stone,” but certainly this high profile inspiration featuring four highly adorable Hollywood stars that include Sandra Bullock, Channing Tatum, Daniel Radcliffe and Brad Pitt (in a special cameo) is certainly not a pale clone.

Having everything that has made movies like Romancing The Stone and Indiana Jones adventures interesting, The Lost City has wild jungle adventures, gorgeous woman, a handsome man who is not that heroic, a treasure hunt, bad guys with a difference and good fun.

Sandra Bullock as Loretta Sage a widow who claims to be a “sabiosexual” (those who get attracted to intellect), is excellently charming all the way in those purple dress.

The cove model hunk Alan (Tatum) adores Loretta for projecting him as a flashy lady charming ‘hero’ which he isn,t while Loretta is struggling with her personal losses and is not that attracted towards Alan makes things very interesting.

Enters a well-dressed billionaire Abigail Fairfax (Daniel Radcliffe) the villain with a British accent. He wants that treasure and cut to that Jungle which is said to be shot somewhere in Dominican Republic).

Alan in his quest to prove himself as a hero in real life sets on the mission to save Loretta and Brad Pitt makes an entry as Alan meditation teacher.

Brad Bitt is a Navy SEAL is terrific and the action will give you goose bumps.

The situation brings Loretta and Alan together the screwball chemistry between Bullock and Tatum is the biggest highlight.

Of course, the potential of the plot and the stars are underutilised which makes it a crowd-pleasing adventure but doesn’t has that power to stay along long.