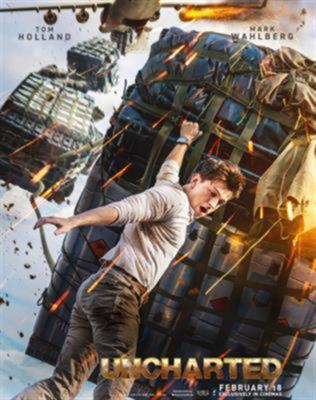 Normally, the video game geeks hate the movie version of the games, And so far, most movie versions of games deserve the brickbats they receive on every social media platform..

In my humble opinion only Resident Evil has managed to keep me hooked to the movies. Prince of Persia, Warcraft, and even Lara Croft fall short of the excitement that video games offer.

Now let’s look at Uncharted from Naughty Dog. The video game is just amazing, so gamers are bound to pile hate on the film. But there are millions who don’t have a Playstation. This film is for them.

Tom Holland has grown up in an orphanage and is a bartender. He gets a visitor who tells him he could take him to his long lost brother if he could first help figure out clues that lead them to gold. All Tom Holland has are postcards from his brother. But he’s a Magellan geek (Ferdinand Magellan was a Portuguese explorer who circumnavigated the world) and wants to meet his brother. He agrees to help this visitor called Victor (played by Mark Wahlberg) to find the treasure.

The action filled film is worth every penny you pay for a gigantic tub of caramel and cheese popcorn: it has cheesy lines, fast and furious action with lots of parkour and yes many twists in the plot. There are betrayals and double crossers making the puzzle even more interesting.

This is where the gamers hate the movies. They think the film is based loosely on Uncharted 3… Or was it 4? Seriously though, you shouldn’t care. You let these gamers debate and diss the film on places like Reddit and fanboy websites.

Watch the movie for the fun little film that it is. It’s just over an hour and fifty minutes and even though I don’t like Wahlberg’s perennial smugness, I actually enjoyed the film. The repartee between Nate Drake (Tom Holland) and Sully Sullivan (Mark Wahlberg) will put a smile on any cynic's face.

The treasure hunt scenes in Barcelona are as exciting as the action scenes on the ship. Plus there is a cameo from the dude who voices Nate Drake himself. Both Sophia Ali (what a gorgeous accent!) and Tati Gabrielle shine in the film. Both the women are superb in the action scenes.

You would not be wrong if you think that this is Indiana Jones Lite, but hey, it’s a fun ride! Leave the comparisons with the game aside and have fun.