The Lord of the Rings: The Rings of Power to have a marriage of Visual and Practical effects 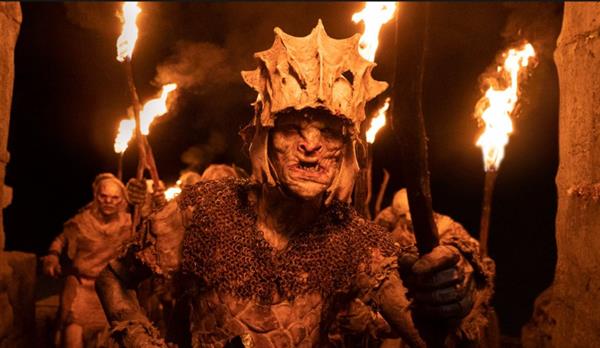 If there was one thing that The Lord of The Rings franchise got everyone excited, was its battles, intriguing creatures and the fantastical world that J.R.R. Tolkien created. The upcoming Amazon Original series The Lord of The Rings: The Rings of Power intends to focus a lot on building this world on Middle Earth and the creatures in the Second Age. Jamie Wilson, head of The Rings of Power’s prosthetic department (also worked on Star Trek and Mission Impossible franchises) and Lindsey Weber, executive producer on the series (also worked on every single live-action LOTR project) dive deep into the creation of these creatures for the upcoming series
Speaking of the production involved behind the Orcs, who first look was recently released, Weber said, “JD and Patrick the showrunners the very first page of their bible was about Orcs. They have a real passion for them, they love practical prosthetics and design, and they felt that they needed exploration given that this is the Second Age and thousands of years before the events of the Third Age. It was really important to them to treat them as their own culture and explore their world on its own two legs in its own right.
As with Jackson’s Lord of the Rings’ films, practical effects remain very important to the creatives behind The Rings of Power. “Time has changed a lot,” says Wilson. “You go back 20 years and we used a basically foam latex, which is like a porous-y kind of rubbery, spongy material with a smooth or whatever textured surface. It was great at the time.” But as times proceed, the creators noted that the series is a close marriage between visual and practical effects. “When they are up close to the camera, Orcs are really practical and almost exclusively,” notes Weber. “
And the places where the visual effects team help we're in more numbers when we need larger quantities than you could amass on a film set anywhere in the world. That's what they sort of, when they come in and do some of, work their magic.
Adding further to this, Wilson said, “We did decide from the outset that we would try and make this a very real show. So therefore, we tried to use real prosthetics and everything and minimize the visual effects, because there are hundreds of productions that are heavy on visual effects, and you can see it, that the human eye is getting better and better and knows what is real and knows what isn't, because we are just getting so deloused with all this product that you begin to know.”
Developed by JD Payne and Patrick McKay, and directed by JA Bayona, The Lord of the Rings: The Rings of Power starts streaming on Amazon Prime Video from September 2 across multiple languages including Hindi, English, Telugu, Tamil, Kannada and Malayalam.
Tags : Amazon Prime Video The Lord of The Ring The Rings of Power