Mujib – The Making of a Nation : Legendary Shyam Benegal unveils the poster 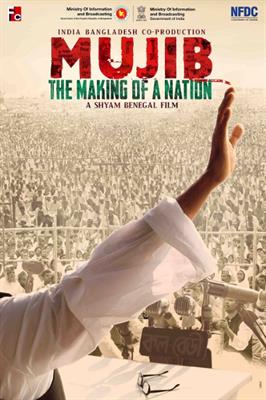 Mujib – The Making of a Nation : Legendary Shyam Benegal unveils the poster

Renowned director Shyam Benegal has released the poster of the film Mujib – The Making of a Nation, a biopic on Sheikh Mujibur Rahman, the father of the nation of Bangladesh. The film on ‘Bangabandhu’ is being made under an Audio-Visual Co-Production Agreement between the Republic of India and the People’s Republic of Bangladesh.

The legendary filmmaker released the poster, at National Film Development Corporation (NFDC), Mumbai, on the occasion of the 102nd birth anniversary of Sheikh Mujibur Rahman.

India and Bangladesh had announced a biopic on Sheikh Mujibur Rahman, during the commemoration of the birth centenary of Bangabandhu. Now, as we close the celebrations of Mujib Centennial, a poster of the film is being released, to mark the completion of production of the film. 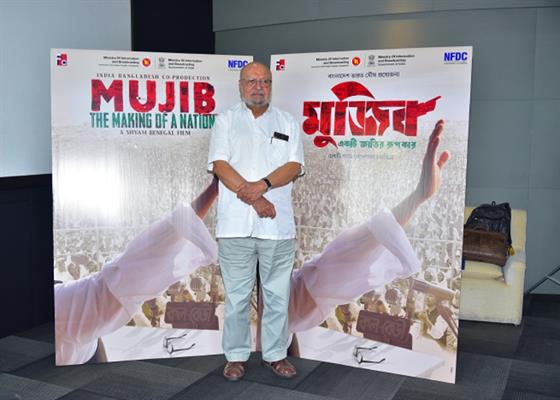 “Mujib – The Making of a Nation remains a very emotional film for me; to bring Bangabandhu’s towering life on reel is a tough task; we have portrayed his character in an uncompromising way. Mujib remained a great friend of India. We hope the poster connects with the audiences.”

Managing Director, NFDC, Shri Ravinder Bhakar, informed that “NFDC has pioneered films by legendary directors who are renowned the world over even today. To be associated with Shyam Benegal ji once again for this project is a great pleasure for the Corporation. Mujib – The Making of a Nation shall be a landmark film in NFDC’s history. Indeed, it is a pleasure associating with BFDC for an iconic film.”

Managing Director, BFDC, Ms. Nuzhat Yeasmin, shared that, “I’m overwhelmed to see the film witness the light of the day. Mujib – The Making of a Nation is an emotion for us. On behalf of BFDC, I would like to extend my congratulations to our counterparts (NFDC) who have stood with us for making this dream a reality. Bangladesh is eagerly anticipating to watch Shyam Benegal Ji’s version of Bangabandhu’s biopic. He is a legendary filmmaker, greatly admired by all of us.”

Actor Arifin Shuvoo, who plays the role of Sheikh Mujibur Rahman said: “Fascinated to be playing the role of Mujib. This is a dream come true. I am honoured to be a part of this iconic project, and to be directed by the legend himself, Shyam Benegal Ji. No words to express how big this feature film is for me and for my nation. I felt the warmth and great hospitality during the production of the film in India. Hopeful that I have justified the role and the audiences will connect with me and love the film, the way they love Bangabandhu.”

The film was extensively shot in India and Bangladesh, abiding with all the health guidelines amidst the COVID-19 pandemic. The production of the film concluded in December 2021.

Sheikh Mujibur Rahman - Father of the nation of Bangladesh

Mujib, provided the political leadership for the independence of Bangladesh in 1971. At the early stage of Mujib’s political career, he met Mahatma Gandhi who was a great source of inspiration for him to empower the masses, an inspiration which remained throughout his life. Moreover, the biopic celebrates Mujib’s life; it takes us into the course of history which will be re-lived by the audience. The film depicts the great leader whose accomplishments live on.

Mujib was born in a prestigious Muslim family and grew up in a religious and harmonious atmosphere. He was very kind to the poor and was empathetic towards them. He admired Mr. Huseyn Suhrawardy. He struggled against the disparity and deprivation between West Pakistan and East Pakistan and against the Pakistani Military rule. He was imprisoned for about 11 years in the period 1947 to 1971. He strived and achieved the formation of an independent and sovereign state “Bangladesh”. That’s why Mujib is known as the Father of the Nation of Bangladesh, as ‘Bangabandhu’. He was an iconic personality. His speeches and courage changed the course of history of Bangladesh.