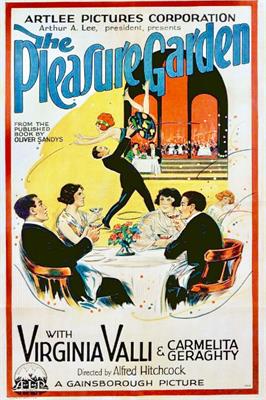 At the young age of 25, Alfred Hitchcock made his feature directorial debut in the German-British co-production.

Producer Michael Balcon assigned Hitchcock as director, when Graham Cutts, an executive at Gainsborough Pictures, refused to let him work on “The Rat.”

Thanks to BFI's restoration of Alfred Hitchcock's first film - The Pleasure Garden introduced a Hitchcock we don’t know. The masters first movie made around 87 years ago is about tangled love lives of two chorus girls - Patsy Brand (Virginia Valli) and Jill Cheyne (Carmelita Geraghty), at the Pleasure Garden Theatre. Jill is unfaithful to her fiancé Hugh Fielding (John Stuart) while Patsy marries Levet (Miles Mander) who eventually betrays her.

Overall an above average phenomenon for the common viewers, however for the learners, fans and professional related to filmmaking in general, the movie has some striking images that introduces those elements which became part of Alfred Hitchcock's style of filmmaking in future. voyeurism, sexy teasing, slumping pickpockets, dancing girls, manipulation, delusion traces of all these elements which became familiar his better-known later work.

The first shot captures chorus girls on as spiral staircase, (Vertigo); a man uses opera glasses (Rear Window); A doggie is licking the toes of the actress (Secret Agent). But for me the scene during the climax made a place in my mind. When

Miles Mander as Levet holding that sword sloshed in his dangerously lunatic mood moving through a grilled door about to hit Patsy as the danger looms over her, Levet shadow with that weapon starts growing big overpowering his victim. The image of Raj Kapoor’s most talked about dream sequence in Awara became fresh for a while.

The Pleasure Garden was filmed by a British company with American stars at a German studio, and on location in Italy, and in a similarly international spirit the new print, though assembled by the BFI, contains material from five archives in four countries.

The Pleasure Garden itself wouldn’t get publicly screened until 1927, after Hitchcock had already had some success with his third feature The Lodger. But the picture that will always remain his first has accrued a good deal of respect over the past 86 years, and it received a BFI restoration this year.