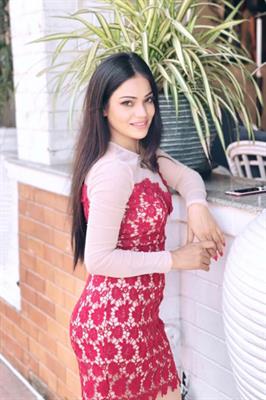 The gorgeous actress Aakarshika Goyal is bombarded with messages on her social media pages from her fans requesting to see her with Mankirt Aulakh.The actress's fans also expressed that they loved her in all the music videos she has featured in. Mankirt Aulakh is a big-time Punjabi singer who has given us fantastic songs such as Badnam, Vail, 8 Raflaan, Bhabi, Kadar, and many more.
Replying to all her fans, Akarshika Goyal says, "I would love to work with Mankirt Aulakh if the opportunity presents itself. I am optimistic that it will happen when the right time comes. I request my fans to keep supporting me, and I will strive to bring out more exciting projects for them."
Akarshika Goyal has appeared in soap operas and reality TV shows including Savdhaan India and Halla Bol. She has also appeared in Haunted Nights, Ajab Gajab Ghar Jamai, and Swim Team. A total of nine songs are set to be released. Her next movie, featuring a star-studded cast, is slated for release down south soon. Official announcement to be made soon.