DIVINE makes his Maiden appearance at the 64th Grammy Awards 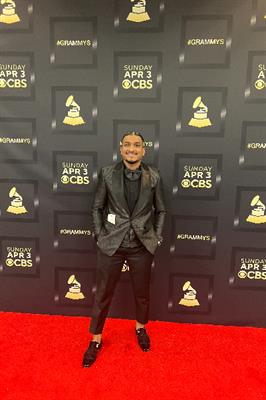 After a delay of more than two months caused by an unpredictable pandemic, the Grammy Awards returned with a slew of potential historical moments and performances. For the first time, the 64th annual ceremony hosted by Trevor Noah was conducted at MGM Grand Garden Arena, Las Vegas -- away from its’ traditional home in Los Angeles and saw a range of performances including Nas, Jack Harlow, Lil Nas X, Silk Sonic, Billie Eilish, BTS, Lady Gaga and Olivia Rodrigo.
Representing the Gully rap movement on the world stage, multi-platinum rapper DIVINE made a smashing debut appearance at this year’s award night becoming the first homegrown hip hop talent to have ever graced the prestigious event. Dressed by stylist Ambika Sanjana, the dapper Indian rapper wore a bespoke tuxedo by Mander By Karn, shirt by Saint Laurent and shoes by Louis Vuitton.
Speaking about this exhilarating outing DIVINE states, “Surreal to be at the Grammy’s with amongst some of the best in the world! A big shout out to my brother Nas for always believing in the burgeoning Indian hip hop scene.”
The hip hop superstar is all set to launch his third full length album later this year.
DIVINE a.k.a. Vivian Fernandes’ ascent has been no ordinary chronicle. From gully-based productions to debuting his album with Mass Appeal India to launching his own label and entertainment conglomerate Gully Gang Entertainment to being the first Indian rapper' to be featured on Spotify Times Square Billboard in New York City, the rapper continues to be in a musical league all his own, imprinting hip-hop in the cultural consciousness of India!  With a vision of taking Indian hip hop to the world, the rapper inked a worldwide publishing deal with one of the world’s most reputed music publishing companies, Reservoir.