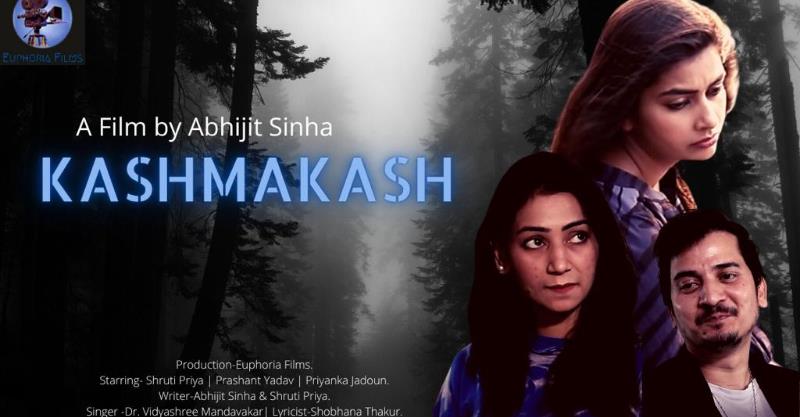 KASHMAKASH is a story about An Aspiring Actress Kavya who meets a Casting Director Akshay on Beach side.
They Gradually fall in Love.
They Start living together.
One Day the love of her life disappears.
What happened to him? No one Knows.
What will she do now? What will happen to her?
Is this a simple story of Betrayal or Something which we never imagined?
Twists & Turns of the Story will surely surprise you.
If you want to find the mystery about these characters.
Just watch this out.
Cast & Crew of KASHMAKASH
Director-Abhijit Sinha
Writer-Abhijit Sinha & Shruti Priya
Cast-Shruti Priya, Prashant Yadav, Priyanka Jadoun
Creative Head-Nisha Prabhat.
Editor-Nisha Prabhat & Aarav Sinha
DOP- Rajan
Producer-Euphoria Films.
Music Composer & Lyricist- Shobhana Thakur.
Voice over-Aprajita Kashyap, Praveen Shrivastava.
Singer-Dr.Vidyashree Mandavakar
Background Music-Deep music non-copyright.
Special Thanks-Aarav Sinha
The Film is Directed by None other than well-known Multi-Talented Artist Abhijit Sinha.
Abhijit Sinha is a Bollywood Actor and has acted in many popular Tv serials in Character Roles and many crimes shows along with Web-Series, Short Films, Corporate Films, Comedy Shorts, Theatre, and Ads.
He is an established Script Writer an SWA member writing for Short Films & web series.
He has Directed 11 Award-winning short films, Music Videos, and Comedy Short Series under his Home Production Euphoria Films in the last couple of years.
He is a lyricist with 8 songs released in the last 1 year and many more works in progress. Shruti Priya Joined Abhijit in this venture not only as his Leading Actress but also, she is the Co-Writer of the Film. Shruti is Abhijit’s Confident for last many years and She is lead Girl of his earlier Short Films-Faisla, Wrong Number and Duayein all these films are Award winning projects and critically acclaimed. Shruti Priya hails from Patna Bihar, currently pursuing her acting career in Mumbai. She is an experienced professional actor who has appeared in many Hindi Tv show , web series ,short film and also a theatre artist associated with Ekjute theatre Group Specialised skills in Improvisational theatre, Bollywood Dance and Screen Acting.
Abhijit and Shruti has many Common link. They Both are from Bihar and from Same Theatre Group. Abhijit was Shruti’s senior in Theatre group. They Both Like discussing on projects along with Writing and direction. Abhijit has now decided to involve and Groom Shruti as Co- Writer & Associate Director for his future Projects. That Shows his confidence in Shruti’s Talent
The Soul of Abhijit’s all Projects are soulful Music and songs.
He has Roped Shobhana Thakur for Kashmakash making her 3rd.Association with Abhijit.
She is the Music Composer and Lyricist for this Project.
Shobhana Thakur is based in Mumbai (basically from Mithila,Bihar)
She has a vast Experience In Music Industry with 50+songs released in different genres, one bollywood movie "Naar Ka Sur" released few months Back.
She has worked wit Various Music Composers and Singers
Including Bollywood singer Anuradha Paudwal,Malini Awasthi and many more talented singers have given voice for her lyrics..
These Days She is working for individual albums and movie.
Singer of the Song Kashmakash,the title track is sung by Dr.Vidyashree Mandavakar .She is a very talented and Celebrated Singer. She is a trained and much acclaimed Classical Singer.
Co-Actors of the Film are Prashant Yadav and Priyanka Jadoun. Both are Emerging new actors.They come from Modelling Field and are doing Prints and Commercial Ads. Both Prashant and Priyanka have worked earlier with Abhijit in different projects as lead actors respectively. Voice Over is Done by Senior Actors Aprajita Kashyap & Praveen Shrivastava.
Both of them have been working with Abhijit in his earlier projects and are with him since his theatre days. Editing is very neat and crisp well executed by Creative Head and Editor Nisha Prabhat. Special Contribution is for Co-editing and Poster is done by Aarav Sinha. The Short Film is Produced by Abhijit Sinha’s Home Production Euphoria Films
This Marks Abhijit’s 11th.Directorial Venture.
The Film looks fresh and interesting. It matches the Expectation of a pure Suspense Thriller Drama.
We From CINEBLUES wish the Team Best wishes for Success for the Film.
Tags : KASHMAKASH