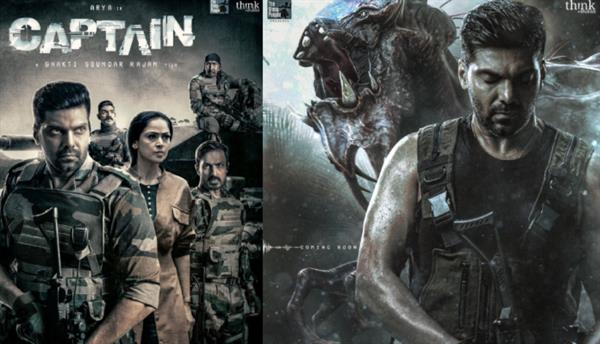 ZEE5, India’s largest home-grown video on demand streaming platform, announced the premiere of Tamil sci-fi action thriller ‘Captain’ today. Written and directed by Shakti Soundar Rajan, Captain features Arya and Aishwarya Lekshmi as central characters and also stars Kavya Shetty, Simran and Harish Uthaman. The Arya-starrer movie boasts of spectacular digital imagery and special effects that doesn’t fail to astonish the audience.
Produced by The Show People, Captain narrates the story of a team of soldiers, led by a brave military Captain, who undertakes a dangerous and life-threatening mission in a restricted forest area. As part of the operation, the team decides to uncover the mystifying truth behind the unexplainable massacre of previous teams that had visited this same site.
The music is composed by D Imman and the cinematography is handled by S. Yuva. Originally releasing in Tamil, the film will also cater to the audiences in Telugu across 190+ countries and territories.  So, brace yourselves for the premiere of this visually remarkable sci-fi action thriller on 30th September.
Mr. Manish Kalra, Chief Business Officer, ZEE5 India said, “After the success of Vikram, Yaanai, RRR and Mudhal Mee Muthaval Mee we are thrilled to add yet another Tamil movie – Captain to our library. The movie has phenomenal visuals paired with great performances by actors. Captain also deals with multiple genres like action, sci-fi that the audience will enjoy. At ZEE5, our endeavour is to always expand the entertainment canvas for consumers enabling them to explore a wider range of genres.”
Tags : Captain