The White Tiger movie review: The Halwai who sold his kadai 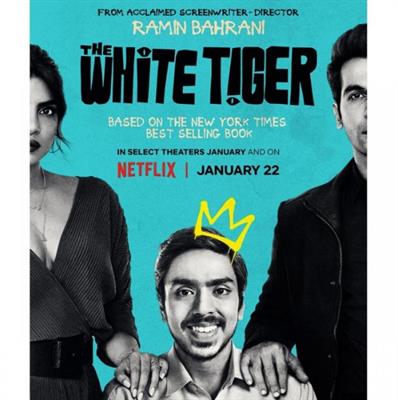 Balram Halwai (Adarsh Gourav) narrates his epic and darkly humorous rise from poor villager to successful entrepreneur in modern India. Cunning and ambitious, our young hero jockeys his way into becoming a driver for Ashok (Rajkummar Rao) and Pinky (Priyanka Chopra-Jonas), who have just returned from America. Society has trained Balram to be one thing -- a servant -- so he makes himself indispensable to his rich masters. But after a night of betrayal, he realizes the corrupt lengths they will go to trap him and save themselves. On the verge of losing everything, Balram rebels against a rigged and unequal system to rise up and become a new kind of master.

Ramin Bahrani’s adaptation of Aravind Adiga's 2008 Booker prize winner of the same name – the story of rags to riches of an Halwai (a person specialised in making sweets) Balram (Adarsh Gourav) is a ‘play safe’ please the cliché mindset of an average westerner. So, showcase India as a land of Maharaja, Mahatama Gandhi, snakes, cow and poverty.

It’s a pity that no one including the Indian actors Rajkummar Rao and Priyanka Chopra Jonas (also the executive producer) advised Ramin Bahrani that the opening scene of the movie shot on as Lutyens' Delhi that has that famous Mahatma Gandhi sculpture is a high-security zone so it’s impossible to find pavement dwellers there. And how come cattle appear all of a sudden in one of the poshest localities of Delhi. Mind you, the protagonist Balram Halwai is seated back seat clad as a Maharaja.

The pseudo is pleased as in one shot you have a Maharaja, Gandhi, Cow, a garib Indian in sadi Delhi.

And this is not the area where Ramin Bahrani’s adaptation falters. Its shows poor understanding of caste system in India.

Shockingly, Ramin Bahrani ignores the strong religious comment made in the novel for its big screen adaptation and relies on unconvincing techniques to put his point forward.

Picture this – In Balram’s own confession in the movie which is told through his own narration, The Stork (Mahesh Manjrekar) and his elder son Mukesh – The Mongoose (Vijay Maurya) – the rigid Hindu collect every detail about their employee before hiring. How on earth they are fooled easily by their trusted senior driver who in fact is a Muslim but posing as a Hindu for years. Our hero Balram unearths this mystery easily.

The area where Ramin Bahrani gets it right is the metaphor of the Roosters trapped in the cage used for the have nots/underprivileged and the twist in the character of Pinky (Priyanka Chopra Jonas) which shows better sensibility and beams with hope.

Adarsh Gourav impresses. Priyanka Chopra Jonas is fine. Kamlesh Gill as the grandmother is outstanding. Others just pass the muster.

The White Tiger is Ramin Bahrani’s superficial, poorly researched adaptation of Aravind Adiga's 2008 booker winner novel of the same name. The Halwai had sold his kadai, going with a generous dhai (an extra for our dear Piggy Chops).