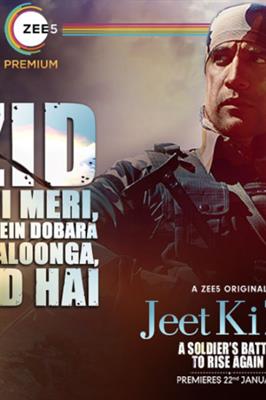 What: The Zee5 original starring Amit Sadh as Kargil hero Major Deependra Singh Sengar is a must for every Indian, every human

Inspired from a true story of  Kargil hero Major Deependra Singh Sengar – a living legend and an inspiration., Zidd is a tale of conviction, persuasion and commitment. It's the story of a man whose ability to turn impossible into possible, makes him unique and inspiring. The series follows the life of a Special forces officer Major Deep Singh (Amit Sadh) who is left paralyzed waist below after fighting the Kargil war, but his army training and never-give-up attitude help him get back to life and eventually on his feet despite all odds.

Encapsulating all the key moments from the life of Major Deependra Singh Sengar who hates the word ‘No’, right from his military training to deadly missions to Kargil war and the journey after where he cracks IIM and becomes a successful professional in the corporate world. It is a story of a man's perseverance.

Writer Siddharth Mishra and director Vishal Mangalorkar shape this series into 7 episodes of sheer valour and determination showing us a ‘real’ hero, a soldier, a warrior, a patriot who is unforgettable. The incredibly inspiring real-life story of Major Deependra Singh Sengar gets transferred this time on the silver screen. Beginning from a lovable admirer of his athletic elder brother who becomes a victim to terrorism. The loss of his brother turns Deep into an iron-willed person who accepts every challenge thrown at him bravely. The writer director might have taken some liberties for dramatization but never the filament of the theme is disturbed throughout. The appearance of the real hero Major Deependra Singh at the end of episodes elevates this story telling and fills the audience with real pride and admiration for the man.

Inspiringly human where flaws are addressed. The series steers with some uplifting message on self believe.

Amit Sadh is outstanding as the Kargil hero Major Deependra Singh Sengar on screen. The actor gives a strong, moving and mature performance which will become a highlight in his OTT career.

Amrita Puri is amazingly natural as the loving wife and life partner who cares and understands.

Sushant Singh is just terrific as the commanding officer in the training camp.

Some melodrama could have been reduced.

Scene that should be deleted at once

Watch it for the real hero - Major Deependra Singh Sengar a true soldier, warrior, fighter, a motivation. A must for every Indian, every human.