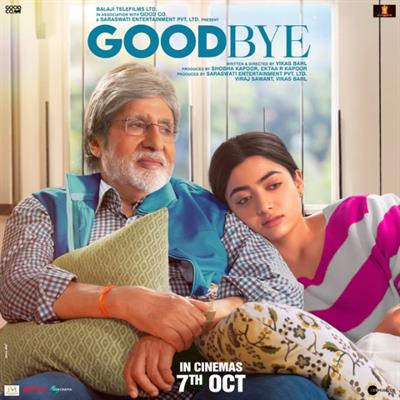 What: Goodbye – Amitabh Bachchan, Rashmika Mandana starrer is a life assuring and faith ensuring cinema that beams with love, positivity and has that emotional sweep which will last long.

One day, suddenly Gayatri passes away due to a heart failure, repeated calls by Harish to her daughter Tara – partying to celebrate her first case win goes unnoticed.

Son in abroad with his girlfriend (played by Elli AvrRam   will take time to land while Harish’s adopted son played by Sahil Mehta is also stuck. Harish’s younger son – Abhishek Khan (in his debut) is untraceable.

Finally, they all meet and what transpires during the funeral process is an emotional journey of acceptance, understanding, love, faith and remembrance.

A funeral dramedy coined with a debate between believers and non believers on customs and traditions observed during a Hindu funeral. A subtle attack on the same with a tease on priorities, and a delightfully heartfelt coming of age that reassures life and ensures faith in the ‘right’ way is the crux of writer director Vikas Bahl (Queen, Chillar Party fame) Goodbye.

An unfortunate incident based on the harsh truth of life (death) –of a near and dear family member.

Vikas Bahl during the first half develops the casual nature of Harish’s children. Rashmika questions every activity during the funeral, she cares but has the habit of finding logic and science in everything.

Pavail Gulati is not able to schedule his time for office and home.

It may appear to be a clash of ideologies but primarily it’s about the casual approach.

People may question the ignorance of Harish children who seems to have not seen any funeral in their life.

So some in some scenes Vikas Bahl may be accused of going overboard and till interval point I smelled the danger of the movie getting targeted for questioning the Indian customs and traditions.

Thankfully, during the second half when Harish and his family go the holy Ganges to immerse the ashes of Gayatri, the movie starts gaining its positive points.

The character of Sunil Grover – a sadhu who helps the family in the rituals and also opens the windows of knowledge for Tara and others is the major highlight.

But it’s not about the believe system, what overwhelms in Goodbye is the idea of life and life after the death of some near and dear.

The flashbacks of Gayatri fill in fresh breeze and are filled with hope,

The story of Harish and Gayatri is nostalgia redefined.

Slowly and surely how the family bonds together and celebrates the spirit of life and Gayatri is the biggest USP of Goodbye.

Amitabh Bachchan is pure class. His aura, his presence is just extraordinary. The scene at the holy Ganges when he gets emotional while immersing the ashes of Gayatri is exemplary. Nest week - 11th October, the icon for the icons will be celebrating his 80th birthday and we already have a heartfelt gem on screen in which the brilliance of Mr. Bachchan will be seen by all. Unparallel.

Neena Gupta is just brilliant. Her presence brings instant positive vibes and she delivers Gayatri – the source of positivity, liveliness and hope in the family with great aplomb.

Rashmika Mandana in her Hindi film debut is fabulously natural and right into the skin of her character. Her scenes with Amitabh Bachchan are fantastic and has come out well.

The father daughter bonding between Amitabh Bachan and Rashmika Mandana is heartwarming.

Pavail Gulati is very good and has some fine individual moments as well.

Elli AvrRam is quite decent in her role.

Sahil Mehta is very nice as well and makes his presence felt.

Abhishekh Khan makes a noteworthy debut and his scene will bring out your emotions.

Payal Thapa as the caretaker of the house is impressive

Ashish Vidyarthi as the neighbor has his moments

Sunil Grover is marvelous as the sadhu who becomes the eye opener and gets some good lines.

The late veteran Arun Bali who unfortunately passed away today leaves his impact.