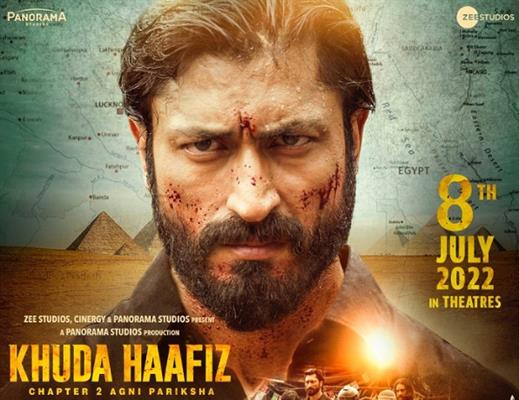 What: Khuda Haafiz: Chapter 2 Agni Pariksha – Vidyut Jammwal’s raw and real action drama is the action star’s most emotional bet as an actor till date.

Sameer (Vidyut Jammwal) has rescued Nargis (Shivaleeka Oberoi) and they are back in Lucknow.

However Nargis is not able to cope with her trauma in Noman where she kidnapped and gang raped.

Sameer and Nargis are struggling to lead a normal happy life, a boon in the name of cute girl child Nandini (niece of Sameer’s friend) comes into their life.

Sameer and Nargis adopt Nandini but happiness is short lived. Nandini unfortunately becomes a victim of molestation along with a teenage girl of her own school.

The culprits belong to a supremely powerful Thakur ji (Sheeba Chaddha). From an angry lover/husband in 2020 now an angry father- Sameer has to strike back or else…

Without any doubt Vidyut Jammwal is the perfect rle model/example of an Indian action hero. The best Indian in man to man combat on silver screen till now.

What he needs is a story that affects the audience in its genuine emotion rather than fictional spy/action dramas which are more of good OTT (over the top) entertainers.

Khuda Haafiz: Chapter 2 Agni Pariksha this time finds Sameer against the girl molesters in UP – Lucknow.

Writer director Faruk Kabir shows his strong believe in buildup/establishment in mainstream cinema. The first half is all building up/mounting of raw, intense clash that follows in the second half.

The action is terrific, raw, brutal and gory at sometime but absolutely striking to the hilt.

Vidyut Jammwal gets a lot of scope here to emote and does well. The anger/angst is felt and the action icon delivers as an actor here as well.

Riddhi Sharma as Nandini is fabulous

Shivaleeka Oberoi is the biggest drawback, her characterization is shaky and she has to improve a lot as far as acting is concern.

Sheeba Chaddha for a change as an OTT evil Thakur initially grabs attention but later her character lacks the bite.

Dibyendu Bhattacharya is good as Rashid Qasai but gets very limited scope.

Rajesh Tailang as Journalist Ravi Kumar (modeled on Ravish Kumar is a waste of a good talent.

Khuda Haafiz: Chapter 2 Agni Pariksha is a watchable action drama and the best part is the emotions are felt and the action is raw and real with no CGI artificial laughable stunts.