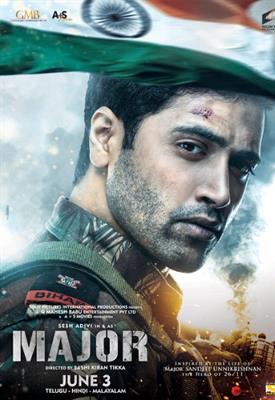 What: Major – Telugu actor Adivi Sesh Hindi debut is a moment of pride for every Indian.

Major is a biographical on the extraordinary valour of Major Sandeep Unnikrishnan – The Indian brave heart an officer in the Indian Army serving in the elite 51 Special Action Group of the National Security Guards who was martyred in action during the November 2008 Mumbai attacks.

Adivi Sesh plays Major Sandeep Unnikrishnan and the movie traces his journey as a child who initially wanted to join the navy how became a glorious chapter in the history of NSG, Indian Army who fought like a true warrior and explained what it means to be a soldier.

No chest beating jingoism, sheer determination to save the nation, explaining the right meaning of what it means to be the son of soil, a true soldier and a better human being, Major is action war biopic saga that is necessary for every Indiana and every human.

Filled with never ending passion, writer actor Adivi Sesh with Hindi dialogues by Akshat Ajay Sharma gives us a human story of a child who is fascinated by uniforms.

So much that he loves visiting Jail and how that passion to wear a uniform shapes the life of Sandeep Unnikrishnan from Kozhikode, Kerala to Army training in Pune.

The writing by Adivi Sesh is simple and connecting, the incidents are identifiable and the emotions are real.

The best part is the organic way the feeling of patriotism and respect for a true soldier gets infused in the hearts and minds of the audience.

The tanning sessions at Army camp, the emotions between Sandeep’s mother played by Revati and father played by Prakash Raj are heartfelt.

Sandeep’s love angle with Isha played by Saiee Manjrekar has some great moments and it’s not stretched unnecessarily.

The second half is mind blowing, when the action begins and Major Sandeep Unnikrishnan lands at the Taj Mahal Hotel in Mumbai you have one of India’s best action movie in hand.

It’s a complete blast, filled with constant nonstop adrenaline rush and patriotic feeling to savor, the rescue operation in Major in coming days will be considered as one of the best filmed action rescue scenes.

The climax will make you emotional and fill your heart with pride without any iota of doubt. If the last 20 mins of Major does not move you and respect Major Sandeep Unnikrishnan and the Indian Army then your Indianness is at question.

Adivi Sesh is the heart, flesh, body and soul as Major Sandeep Unnikrishnan. Brilliant throughout and must say the perfect choice. His body language, poise, his voice control and the terrific ability to get into the skin of the character plus having a remarkable screen presence makes Major a performance, a movie to remember.

Sobhita Dhulipala as Pramoda – the tourist stuck in the hotel room has her moments and those moments make Major a great story of survival as well.

Prakash Raj as the father is pure class

Revathi as mother is pure brilliance.

Cinematic liberties yes at times and unnecessarily. That unwanted inclusion of Mahatma Gandhi in the end was not at all needed.

Major is a great achievement, a passionate movie on the valour of the great Indian brave heart Major Sandeep Unnikrishnan that gives us the true meaning of a soldier and a better human being. Introduction of a great talent called Adivi Sesh to the Hindi cinema and last but not the least, Major is great but that’s not that important, movies like Major are necessary – that is more important.