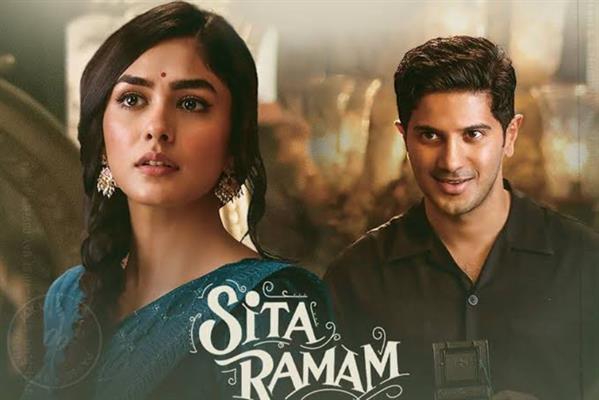 In 1985, Afreen (Rashmika Mandanna) is a proud Pakistani; she hates India and studies in London. One day in a fit of rage, she destroys the car of a rich Indian philanthropist in London Anand Mehta (Tinnu Anand).

The violent act results in Afreen with two options. A – Admit her mistake and apologize or pay a million rupees. Failure in doing any of the said options, she may be taken into custody.

Afreen has not spoken with her grandfather for years and when she reaches her home, she comes to know from the lawyer that her rich grandfather is no more. And to claim her right over her grandfather’s assets and wealth, Afreen has to complete an unfinished job.

Afreen has to deliver a letter written by an Indian soldier Lieutenant Ram (Dulquer Salmaan) to the woman he loves Sita Mahalakshmi (Mrunal Thakur) in India.

With no option left, Afreen lands in India along with her college senior Balaji (Tharun Bhascker) in search of Lieutenant Ram’s Sita.

In her search for Sita, Afreen ( the Hanuman of this re imagined Ramayana) understands the meaning of true meaning of love and humanity.

The good message of love, peace, harmony and humanity is welcomed any time. But in showing humanity even if it is sugar coated in Indo Pak Bhaichara crossing boundaries of country and religion, it has to be true to its responsibility.

Ironically, what was supposed to be Sita Ramam USP, becomes its drawback, thanks to the over stretched Veer Zara inspired second half, repetition and forced emotions.

Sita Ramam at times is so predictable.

It also reminds of one of Sanjay Kapoor’s better films Sirf Tum (199) by Agathian co starring Priya Gill which in fact was a remake of Agathian ‘s 1996 Tamil film Kadhal Kottai starring Ajith Kumar and Devayani.

Coming back to Sita Ramam, once your eyes are done with the gorgeous Sita (Mrunal Thakur) and the adorable Lt. Ram (Dulquer Salmaan), you will start seeing things that are uncalled for or done purposely.

What is so unique in Sita’s letter from the whole big bunch that Ram gets so deeply involved is unconvincing.

Once Ram enters Hyderabad, many can predict the secret of Sita.

The humanity, message of love is all good but why this prolonged climax and utterly unconvincing side of Indian Army shown in the movie.

Plus there are many more flaws.

Sita Ramam is eye popping but unconvincing fairy tale that in the end tests your patience and refuses to end.