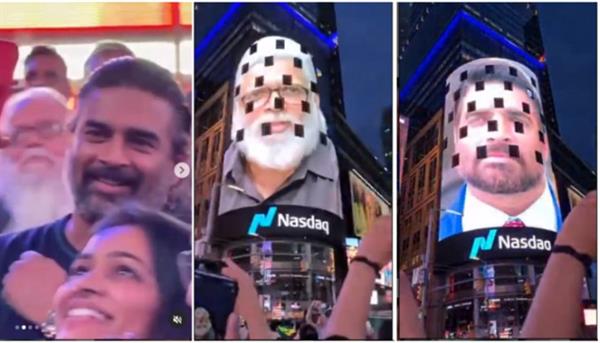 R Madhavan’s directorial debut Rocketry: The Nambi Effect has been in focus for fans not only in India but all across the world! After shaking things up at Cannes Film Festival, Team Rocketry has embarked on an exciting 12-day promotional tour across US.

One of the highlights so far has been the city of Stafford, Texas declaring 3rd June as Nambi Narayanan Day. This is also where the ISRO genius Nambi Narayanan, on whose life the biographical drama is based, met up with astronaut Sunita Williams for a personal interaction.

Next stop for Team Rocketry is New York and it looks like R Madhavan has taken it yet another notch higher! The trailer of Rocketry: The Nambi Effect played on the Nasdaq Billboard at Times Square, the world’s largest billboard. Present to watch and beam it live in person from 8:45 PM and 9 PM on 11th June, Saturday, were none other than actor-writer-producer-director of the film, R Madhavan, along with the ISRO space scientist Nambi Narayanan. And the trailer was received with much applause and love with people all across the world hooting and cheering.

Speaking about the trailer being screened on the Nasdaq Billboard at Times Square, R Madhavan said, “It is all very surreal! Time has gone by so quickly – it feels like it was only yesterday we were shooting the film and now, here we are, a few days away from the film’s release, screening the trailer on the world’s most coveted billboard! With God’s grace, I’m thankful for all the love and affection we have received so far. We are looking forward to seeing you in the theatres on July 1st!”

Set to hit screens worldwide on 1st July, Rocketry: The Nambi Effect captures the spy scandal that changed Nambi Narayanan's life forever and unravels the truth behind it all. Starring R Madhavan in the eponymous role, the film has a powerful ensemble star cast comprising of acclaimed international actors like Phyllis Logan, Vincent Riotta and Ron Donachie and with special appearances by superstars Shah Rukh Khan and Suriya.  Staged on a mammoth scale, the film has been shot in India, France, Canada, Georgia and Serbia. The film will be released in six languages worldwide, including Hindi, English, Tamil, Telugu, Malayalam and Kannada.

Rocketry: The Nambi Effect is produced by TriColour films, Varghese Moolan Pictures and 27th Investments. The film is being distributed by UFO Moviez and Red Giant Movies in India and will be distributed internationally by Yash Raj Films and Phars Film Co.