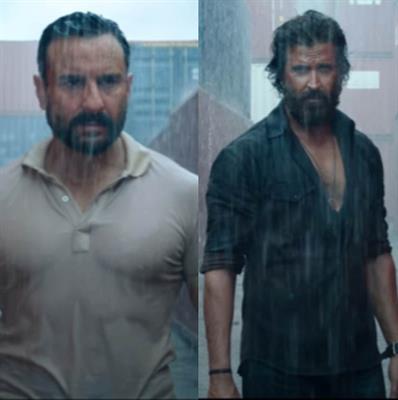 Terrific, solid, superb, maja aa gaya.. these are the words that come out when you see the trailer of the highly awaited Hindi remake of the cult Tamil crime thriller Vikram Vedha.

The makers dropped the trailer recently and it has everything a crime action thriller revolving around a criminal and a cop should have.

Gripping, intense, completely dipped in mass appeal now this is what you call a crowd pleasing action dhamaka.

Well done Pushkar-Gayatri, this is what you call a truly, purely faithful remake.

Pushkar – Gayatri – the creators of the cult 2017 Tamil super hit that starred Madhavan and Vijay Sethupathi has done a proper mass pleasing Hindi adaptation that suits the Hindi belt.

Honestly, I confess that I was not happy with the teaser and wondered why Saif Ali Khan is silent and Hrithik is shown as manic.

The trailer has cleared by doubts and I was just glued to the frame from the very first second.

The voice over of sets the tone of the good v/s evil action packed thriller. The mind blowing back ground by Sam C. S. gives a deja vu of the original to those who have seen the original.

I have seen the original and it’s one of my favorite Indian crime thrillers.

So without giving any spoilers, I will say that Hrithik Roshan as the ruthless gangster Vedha has nailed it to perfection. The Bihari accent is pitched perfect and he just kills it with his swag, attitude and expressions.

Radhika Apte as Vikram's wife and Vedha's lawyer will be a surprise packet.

I normally never review a trailer but after watching the trailer of Vikram Vedha trailer I couldn’t stop my excitement.

The wait for the movie increases by heaps and bounds.

This promises to be something clap worthy and exciting – the prime reason why we as an audience before anything else go to theatres. Enjoy, have fun. Ra Ra Ra Ra Raaaa… bring it on…

Vikram Vedha is a neo-noir action thriller film written and directed by Pushkar–Gayathri, the movie is the official remake of their own 2017 cult Tamil super hit of the same name.

Vikram Vedha is slated to release theatrically worldwide on 30 September 2022.