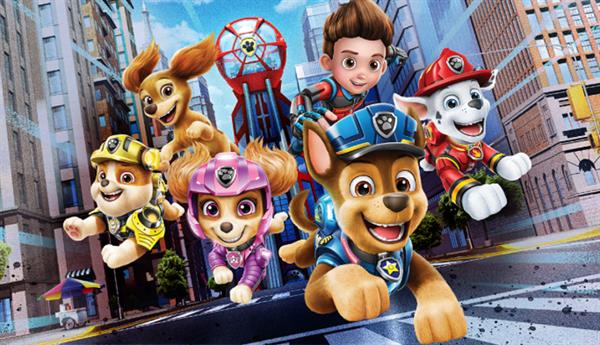 What: PAW Patrol: The Movie - Nickelodeon's animated "PAW Patrol" series gets a movie makeover and it’s an entertaining one for the kids and some adults at the very least. The Canadian, merchandise propagating series has been working its wonders on the small screen since 2013 and it’s been a way-too-long wait for the Big Screen version ever since.

Director Cal Brunker co-wrote this effort with Bob Barlen and Billy Frolick and it’s quite an engaging and subtly educative watch. While the series focused on one rescue or so per episode, the film has much more going on and it’s many layered and even dares to have psychological underpinnings.

Ryder (Will Brisbin), the boy leader of a gang of adorable puppies that include Marshall (Kingsley Marshall), Skye (Lilly Bartlam), Rubble (Keegan Hedley), Rocky (Callum Shoniker), Zuma (Shayle Simons) and Chase (Iain Armitage) – all with a special set of talents, fancy form changing vehicles and abilities that inspire, is called on to rescue Adventure City from certain ruin – thanks to illegally elected Mayor Humdinger (Ron Pardo).

Humdinger is a cat man, hates dogs and so, is hell bent on incarcerating all canines. He is also a Megalomaniac who wants to tom-tom his achievements with a huge flourish. But the events he plans as part of his own personal PR exercise end up reversing all the good that was done by previous Mayors. His attempt to suck up rain weather clouds so that his celebratory event won’t be washed out, ends up in disaster. Of course PAW patrol comes to the rescue - several times over.

It’s interesting to note that each of the pups in PAW patrol are distinctive, breed wise and character trait wise. So kids are likely to cotton on to characters they feel an affinity with. In addition to a villain that resembles a head of state who was recently trounced, there’s some really strong psychological weightiness adding to the meaningfulness of this experience. The cool hi-tech gadgets on display here would make even James Bond more than a little envious. The narrative promotes teamwork, bonding, inclusiveness and courage best exemplified by the PAW patrol team and their latest team member Liberty. The film also has Tyler Perry voicing a truck driver who needs a rescue, Kim Kardashian West as a pampered poodle and Adam Levine involved on the soundtrack.

Deftly directed by Cal Brunker, the animation is visually enticing with its geometric congruence and smooth outlay. The film is very easy on the eye and easier on the brain. It is bound to excite the tiny tots without making it too taxing for them intellectually. This film is the kind of light entertainment young kids would adore.